OK! I admit that I occasionally use filters to add a little cheekbone to my face in pictures. I never considered it to be an obsession with cosmetic surgery or prosthetics. I still don’t. But I do recognize that from Nicki Minaj and Cardi B to Lady Gaga, we are a time where we are obsessed with tweaking – and sometimes completely altering – the features on our bodies.

Fashion Designer Demna Gvasalia, who recently departed from the fashion collective Vetements, brought his provocative vision into his position as creative director at Balenciaga – a design house already famous for its experimentation with shapes and color.

During the Spring 2020 show, models hit the runway in boxy pedestrian suits and massive bell-shaped ball gowns. Among this season’s many boundary pushing details were the towering, ultra-enhanced cheekbones and hollowed cheeks that appeared on models. 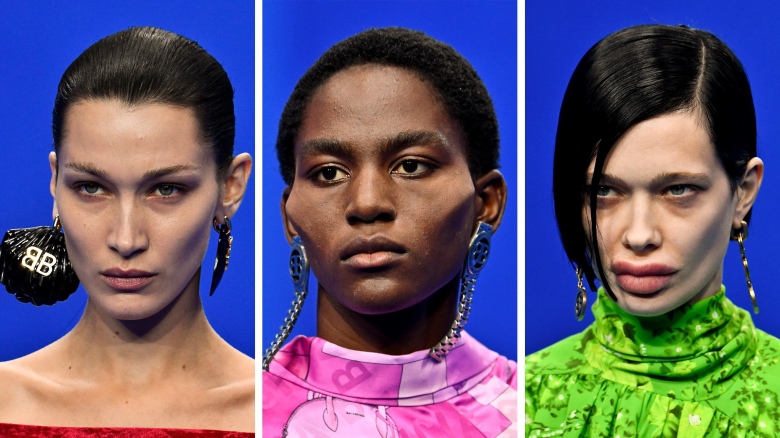 Although quite the statement for Balenciaga Spring 2020, the use of prosthetics has been circulating throughout pop culture for years.

Lady Gaga famously wore prosthetic horns on her forehead, cheekbones and shoulders during the early 2010’s Born This Way era, and on the April 2011 cover of Harper’s Bazaar.

The beauty landscape has changed drastically in the past few years. With plastic surgeries and non invasive cosmetic procedures becoming increasingly ubiquitous and relatively affordable, makeup and contouring tricks no longer cut it for many. The rise of artificial intelligence and special effects in makeup has also further contributed to both altering our perception of beauty and pushed our obsession with plastic-like beauty to the extreme.

According to the American Society of Plastic Surgeons, close to 18 million people received surgical and invasive cosmetic procedures in the United States in 2018 alone. With his Spring 2020 presentation, Gvasalia aimed to both play with and question how deeply deranged our collective obsession with plastic surgeries has become.

As we continue to normalize and perpetuate even more unrealistic standards of beauty how far is too far?